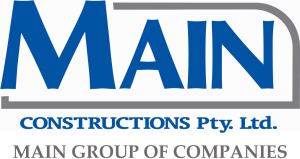 Project Details:                  Main Constructions was awarded the contract to undertake works to upgrade the Bill Brown Reserve to include new netball courts. The scope of work included construction of 4 new netball courts complete with Acrylic Sports Surfacing and lighting, new green open space for recreation, new roundabout and connecting pathways to adjoining facilities, a car park with a minimum of 80 parking spaces (including disability access) and general landscaping. Works provided some challenges with the site being a former refuse site. Much of the remediation works had been completed by an early works contractor but there were still some areas which required remediation works. Other works included stormwater works, installation of new Master Switch board and Distribution Boards to cater for new electrical works, storage shed construction and shade structures.

We are currently closing out works on Griffin Sports Complex and look forward to seeing this facility in full swing.  It has been a pleasure again working with Moreton Bay Regional Council and to be able to deliver another high class facility for the community to enjoy.  Late last year we were awarded another exciting project with Moreton bay Regional Council at South Pine Sports Complex.  This will see the construction of four new soccer fields along with a High Performance Club House and a smaller clubhouse facility. Works here are really starting to take off after the wet weather earlier in the year.